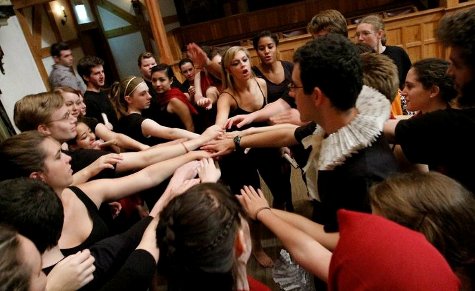 On Monday, the campers were advised to "trust no one and give people every reason to trust you" at a combat workshop led by ASC actor Benjamin Curns. This workshop focused specifically on knife fighting, which Ben described as “the nastiest, because you have to get so close to your opponent to do some damage.” Most people consider the only dangerous part of the knife to be the point, but Ben revealed that almost all of the different parts of the knife can be used to harm. The advantage of using a knife is that one can easily switch hands with a knife as opposed to bigger and more cumbersome weapons. 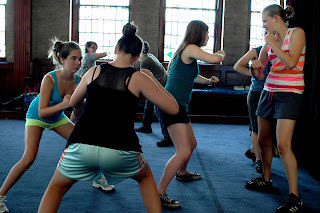 Ben began the workshop by giving a general overview of how to perform a knife fight in a safe and convincing manner. Combat can be dangerous if the fight partners are not effectively communicating about their actions. To ensure safety, you must use constant eye contact and big cues to let both partner and audience know where you’re coming from and where you’re going.

As precautionary advice before the fighting commenced, Ben reminded the campers that they would not actually be fighting. “We’re learning how to miss and keep your partner safe. It is athletic, but it is not a sport. Everything is predetermined. No one is going to best anyone.” He warned that combat is completely dissimilar to martial arts or boxing, where opponents are trying to harm each other and win the fight. Instead, the goal of stage combat is to have the audience walk away and say that the fight looked real and intense. The job of the actor is to sell that there is danger at every moment, while all the while preventing any actual danger from happening. 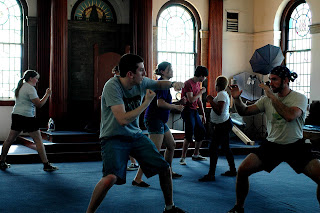 After Ben’s introduction, the campers formed a circle: “The Arena of Death.” Counselors Emily and Dan demonstrated how a fight would begin, slowly pacing around the circle maintaining eye contact. Ben pointed out that despite the discrepancy of Emily’s and Dan’s body types, difference in strength wouldn’t really affect the fight because of the size of the weapon. The campers were asked to find the story in the counselors’ physicality. Campers noted how Emily’s bent knees and slow approach put her on the offensive, while Dan’s engaged left hand signified his preparedness for defense. When both switched from the ice pick grip to the standard knife hold, the campers knew that the fight would soon begin. Even without dialogue, the campers could gage the fighters’ relationship and identify their intent.

The campers then partnered up to try their hands at knife fighting. All laughed as Ben unknowingly paired the campers playing Juliet and Romeo together. Today the star-crossed lovers were going to have to battle to their deaths! First, Ben asked the partners to approach each other slowly, and once they were close enough, to leap into fight stance. 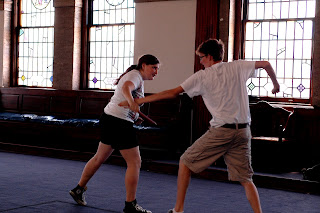 After the campers were comfortable with these initial steps, Ben entrusted them with wooden knives with dulled points. If a camper dropped a knife, the offender had to drop and do ten push-ups as punishment. The campers performed all moves at a decreased tempo, as Ben required that the campers “go crazy slow as if this entire room is filled with molasses”. The fight the campers learned began with a hand-to-hand combat sequence, with their knives temporarily hidden in belts or pants where the fighters could easily access them with their right hands. After the partners threw and deflected several different punches, the fight escalated to sword-play. Once the knives were drawn, the opponents went through a series of cuts and stabs. Some of these moves, if performed in actuality, would be pretty brutal, including a stab to the back that goes in between two ribs, directly to the heart. At the end of the fight, one actor would be left with a big debilitating armpit wound and no weapon, while the other stood doubly armed and triumphant.

Once the campers perfected those sequences, Ben distributed a dialogue of two or three lines from various Shakespeare plays to each pairing. The edition of lines from Macbeth, King Lear, and The Comedy of Errors helped the campers to place their motivation for fighting. Reciting lines in the midst of the fight brought a new passion to the choreography. Several pairs performed their short scenes for the whole group, which were thoroughly convincing after two hours of polishing. Ben praised the performers for remaining slow and safe in the heat of the moment, noting that the presence of an audience increases the temptation to speed up. The young fighters reluctantly returned their wooden knives but left the Masonic building with new skills under their belts.